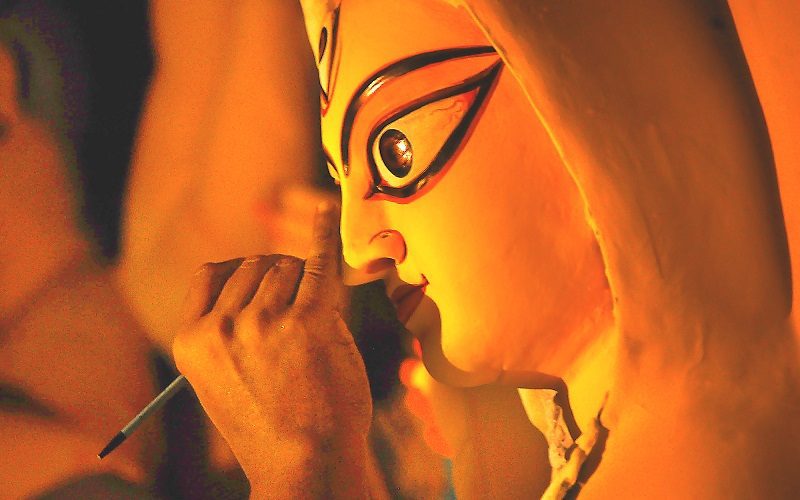 I’m talking about another time. A time of bulky transistors and Eastman coloured mornings. When I’d be woken up by my grandfather, as he gently dragged me out of a flimsy mosquito net, our footsteps often colliding as I then sat perched atop his lap, staring out into a mist smudged October morning. Madhu dada, our Oriya driver’s son would soon turn up the volume as Shanti mashi, my toothless nanny brought Dada (I called my grandfather that) a steaming hot cup of Darjeeling tea, as we all sat in a curious semi-circle, listening to Mahishasuramardini – a two-hour telecast rendered in the overpowering voice of the late Birendra Krishna Bhadra – the saga of Ma Durga’s agomoni (arrival) on the auspicious day of Mahalaya that marked the start of Devi Paksha – the most sacred time in the festive almanac.

Durga Puja helps us forgive Kolkata for what it has become and soak in what it will always be. These five days are about looking back and looking forward – the only time the city can carry the weight of both on its weathered arms.

As Bhadra chanted the convoluted scriptures in his peculiar nasal intonation, I grasped the railings of my balcony, my eyes moistening with an untold fervour as the Goddess mercilessly slayed Mahishasura – in a classic case of good triumphing over evil. It was easy to believe such a battle was possible. I was six. It was easy to believe in anything I suppose. 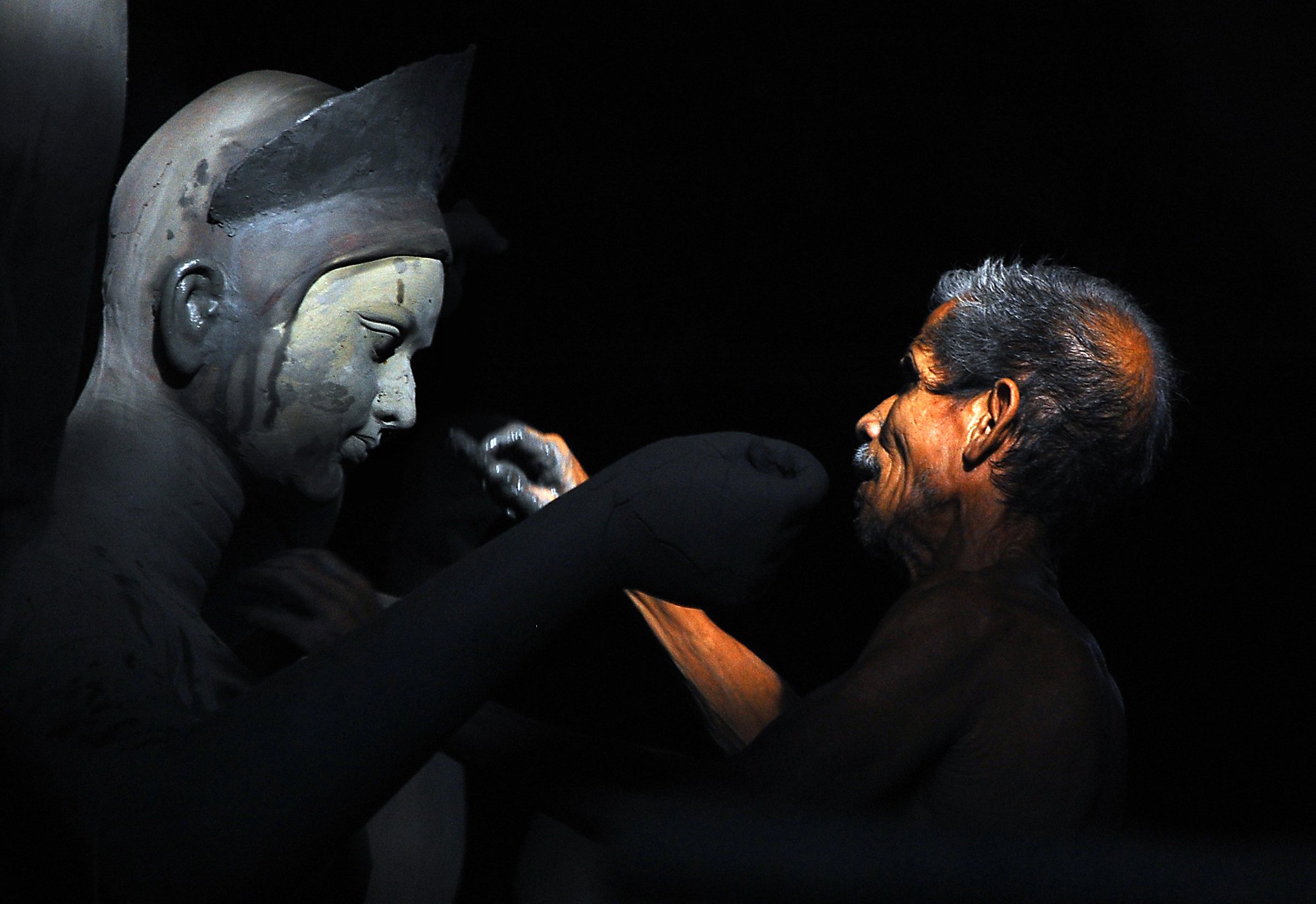 Over the years…ever since my grandparents expired and we left our ancestral home in Kolkata, such mornings have been rendered fewer and far between. And, and yet, to a probashi (offshore dwelling) Bong like me, Mahalaya still holds that magic key – the promise of a home-coming. The chance to get back to Kolkata, in much the same way I left it almost thirteen autumns ago, a strange sadness suffusing my senses – an unresolved parting. Or maybe it has taken me all these years to understand why Dada laid so much emphasis on that one October morning, on why I was bought almost fifteen pairs of new clothes, changing into a new dress, as the day waned, what it meant to visit every pandal, circled carefully in red ink as soon as the morning daily came in, sometimes on his frail shoulders, making eye contact with divinity, rubbing shoulders with all and sundry at pada (neighbourhood) puja sammelans, rehearsing for months on our terrace, perfecting the role of Tagore’s bravest queen – Chitrangada, perhaps, slipping into expensive silk to eat out, every evening, scouring Park Street, sampling the latest eatery with a despicable vengeance, the nights promiscuously porous… the city bedecked like a bashful new bride to be drunk and delighted in. Loudspeakers on in full blast, the
roll of the dhaakis (traditional drummers) adding to the din, thousands of people walking on endlessly, clad in fanciest attires purchased after months of careful
saving, standing in serpentine queues to visit the latest Sharod-Sammanitto (a popular award conferred during Durga Puja to the best puja) mandap, a hedonistic frenzy in their sleepless eyes, carrying their infants high up in their sturdy arms, talking loudly, trying to navigate the din…the five day Calcutta carnival, a sensory trip that was supposed to have commenced first under the aegis of the Shobhabazar Rajbari, one of the most bonedi families of the city, by Raja Nabakrishna Deb in honour of Lord Clive in 1757. The puja was said to be organised as a way of Clive wanting to say thanks for his victory in the Battle of Plassey, and his inability to do so in a church as the only church in the city during that time was allegedly destroyed by Siraj-ud-Daulah.

A colonial repository, the city’s religious roots are best savoured by a visit to its Northern quarters where till today many families continue with the tradition of housing the idol in their marbled courtyards, celebrating the five-day festival as a tradition of an ekannoborti poribaar – an unwieldy joint family that maybe live divided otherwise, and yet converge as one to maintain their historic family legacy. Unlike the glorious past however, most of these sabeki (old world) pujas, which once made British officers of the East India Company guests of honour, wooing them with sumptuous fares and expensive idol decorations and hiring the most expensive nautch girls to entertain their guests – today are seen opening their frayed wrought iron gates to ordinary proletarians, passers-by…peeking into a lost time and a faded glory, staring up at high ceilings, freshly painted in most cases in anticipation, glimmering Belgian cut glass chandeliers (the one that wasn’t auctioned in a distress sale), narrow, winding stairways, mighty canons that have fallen suspiciously silent – perhaps embroiled in a bitter family feud concerning property. 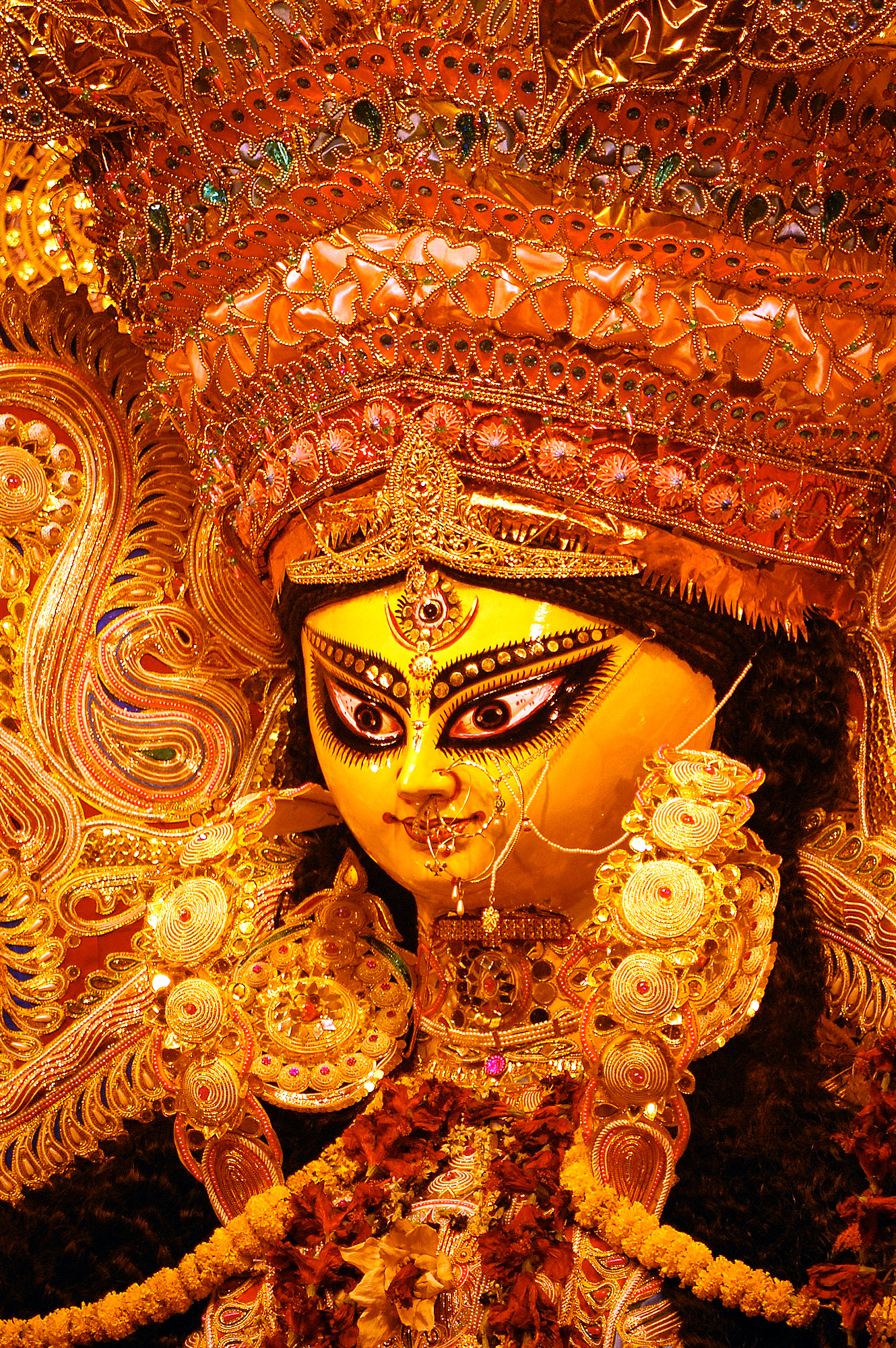 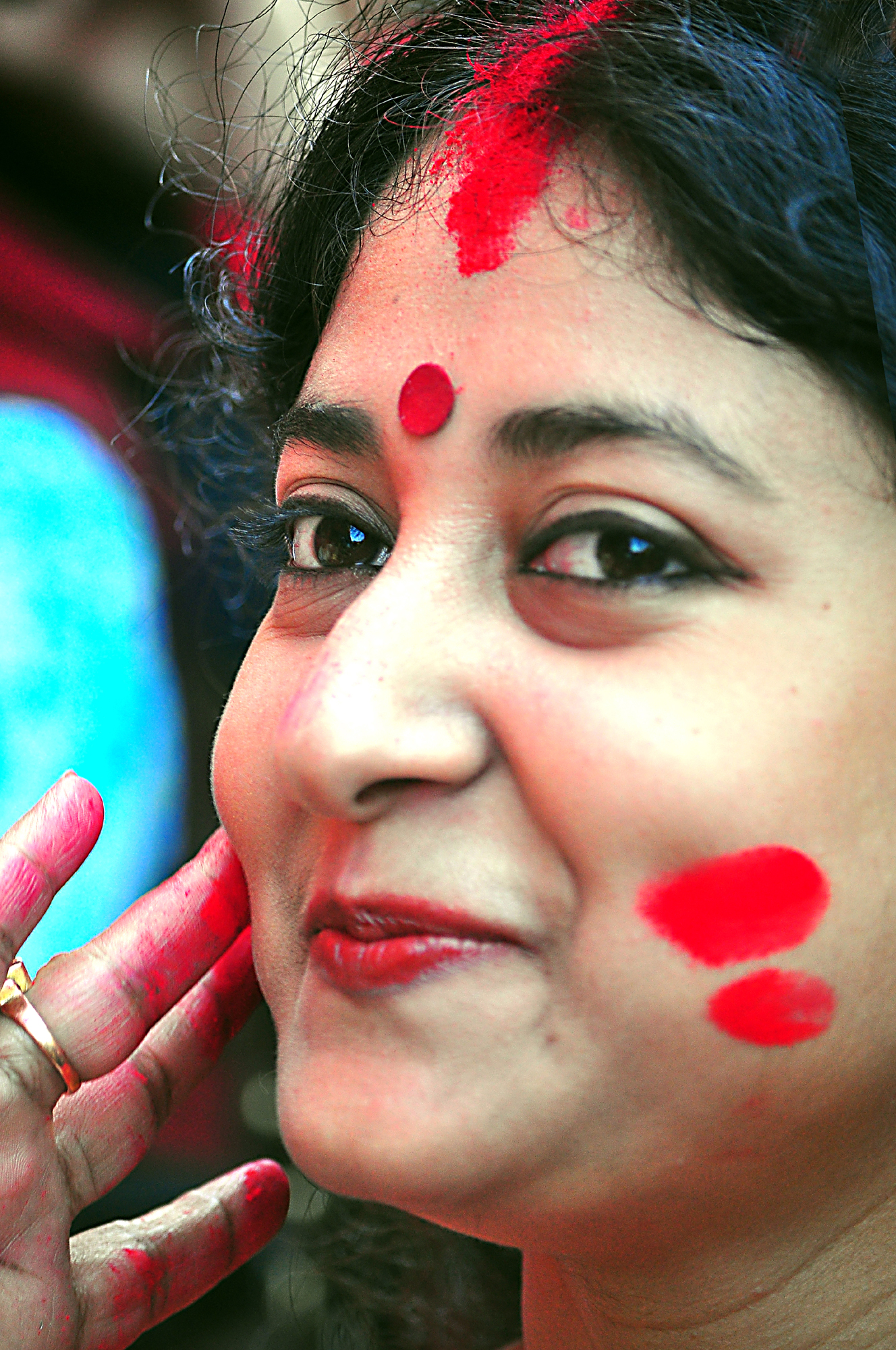 And yet…this is not a sad story. Not quite the sadness a Kolkatan like me feels upon landing, cribbing about the irate traffic snarls or mourning the breaking down of yet another ancestral home to make way for a multiplex or a multi-storied – a faceless city in the constant throes of political ambiguity – a masterless mistress, left with nothing really, except tall tales of yesterday and yesteryears’. Durga Pujas helps us forgive Kolkata for what it has become and soak in what it will always be. These five days are about looking back and looking forward – the only time the city can carry the weight of both on its weathered arms. Rituals occupy centre stage, family comes first, friends step out in their Sunday best, it’s about fun and food and we make no qualms about it. From the Kola bou snaan (A banana tree is dressed as a new bride in yellow silk cloth, the priest carries the tree in a procession to Lord Ganesha as his bride) that sets off the puja revelry on Mahasashti, the sixth day of the waxing moon fortnight known as Devi Paksha, the perfunctory Ashtami (eighth day) pushpanjali that sees women step out dressed in their dhakai jamdanis or Benarasi saris and ostentatious gold finery and men stand tall in their gold bordered, dhakka dewa dhotis and off-white, silk punjabis or the mellifluous purity of Kumari puja where a small girl child (who has not attained puberty) is worshipped as the human incarnate of the Goddess to the elaborate Sandhi puja that marks the onset of Navami (the ninth day) and the culmination of Ashtami, down to the riotous sindoor khela on the afternoon of Bijoya Dashami, customary for married wives who apply thick blobs of vermillion on the Goddess’ fair forehead, before parting their tinged mouths to smear sandesh on her mouth and whisper into her ears, ‘ashche bochor aabar esho (come again next year),’ to finally the merriment of wild dancing atop illuminated trucks in the immersion processions that dot the city’s main thoroughfares marking the heady culmination of this five-day along human fiesta – that has to be only seen to be believed, consumed to be converted, lived in to live on…. 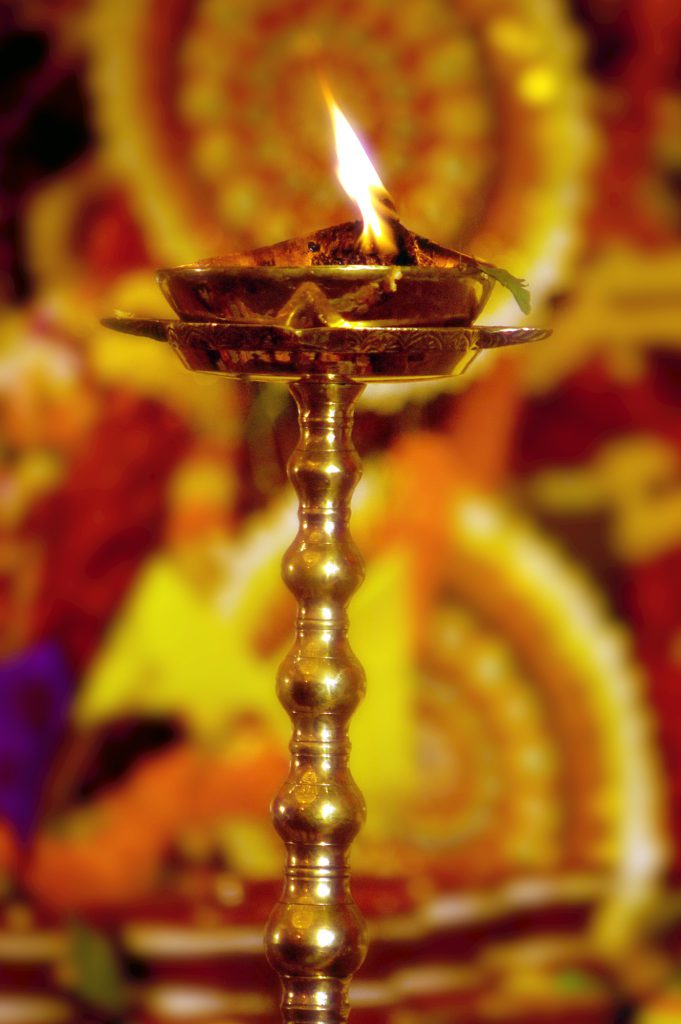 What is it about this festival that makes it so magical, I wonder each year, as my own father, a devoted and converted South Indian-turned self professed Bengali books our air tickets, almost 365 days in advance, as soon as we return to dusty Delhi, within days of our transit from our homeground? Why is it that our Puja holidays are always spent in the shaded sanctuary of a home we left behind? I ask myself now… as I sit penning this. Why is everything that is Bengali about us, even me, stuff that we laugh at and critique so easily, all year through at get-togethers and offices, suddenly turn into a cultural iconography – a rich tapestry of our roots and return to it we must, even if it is only in passing. Perhaps as my father says and says it best I think, ‘How can you not be home on Pujas, it’s like sitting out at your own daughter’s wedding? That is… it’s clearly not possible?’

And so, just like that faded October morning, we pack our bags, stuffing in the remainder of our childhood, the good parts…we spread our wings… flying towards familiarity. For the Devi is not just an idol for us, distant and desirous. She is one of us. A daughter, a mother, a sister, a friend, a lover, a wife, a grandchild…. the sum of what is constant in a world that is ever changing. So, if you’re reading this and are a Bong like me, or just someone who is curious about this thing – this is what the Durga Puja mania in Kolkata is all about. I’d tell you a little secret, you better believe it. Each word and sentence in fact. I’ll tell you why – for it doesn’t get bigger than this! ‘Ma ashchen… shob tikh hoye jaabe… dekhish dadubhai… shob dukkho… shob raag… shob moila muche jaabe… Ma ashchen…’ Dada whispered, parting my tresses. He was right…. and no, I’m not going to translate this. This time. I am sure; you will know what I mean. Things get lost in translation most often and Durga Puja is one of our few remaining dreams…