A bird’s view of India highlights two important elements of our country, colours and festivals. Yes, we’re a nation that takes pride in its ‘festive’ colours and colourful ‘festivals’. And what makes our country’s fabric so interesting and diverse is its history of more than 5,000 years. Each part and fable of our country offers a reason to celebrate, and one such lovely reason is Dusshera. As a child, I recall how school books introduced us to the festival and the teachings from it, the victory of good over evil, but I think I understood the meaning behind the festival only when I watched the Ramleela and the Ravana’s effigy being burnt in the open grounds! Yes, the drama, colours and fireworks made the lessons far more interesting than the words in the books.

According to Hindu mythology, Dusshera signifies the day when Lord Rama, the king of Ayodhya, defeated Ravana, who had abducted his wife Sita. Lord Rama is said to be the seventh avatar of Lord Vishnu. The defeat of good over evil or Rama over the demon Ravana is celebrated as Dusshera, which revolves around the custom of burning effigies of Ravana, his brother Kumbhakarna and his son, Meghnath. It usually falls in the months of October or November, which is the tenth day of the month of Ashwin according to Hindu calendar. But burning the effigies is not the only ritual associated with the festival. Lord Rama is said to have performed Chandi Homa to invoke Goddess Durga, who told Rama the secret to the death of Ravana, and even today in India many people perform homa to evoke the goddess to bless them with power and prosperity. 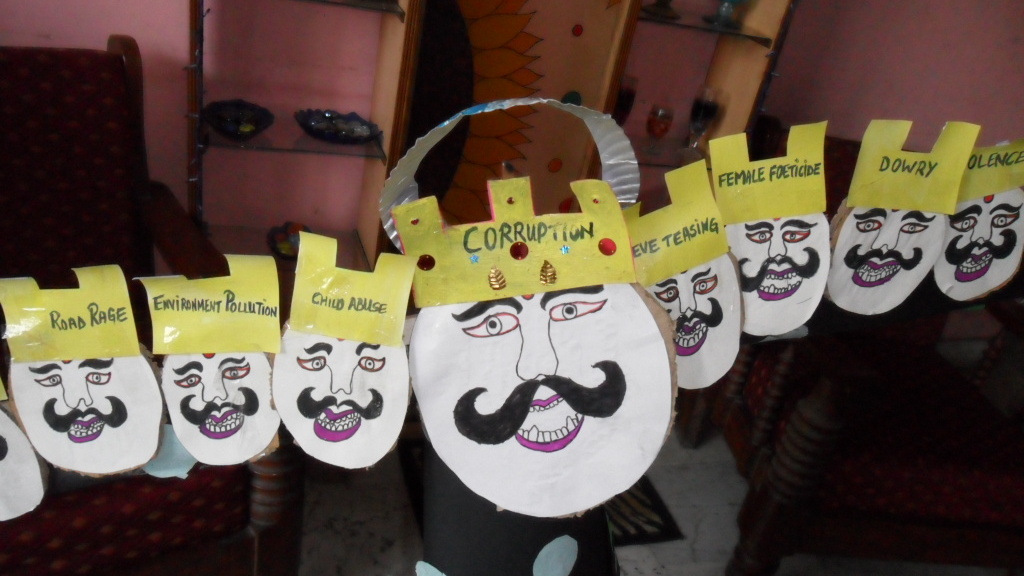 But the ritual that most of us are familiar with is of course, the Ramleela, the colour and drama that we witness in the days preceding Dusshera. Ramleela is the enacting of the Ramayana, which is staged in open areas and attended by all the people in the village, city or town. It begins with a procession of the actors and a small prayer. In villages and small towns, the actors consists of the local people who practice for months to get the lines and emotions right and also dual up as craftsmen, costume designers, set designers, writers, dancers and singers. At least one person in each family is involved in enacting the play thus making it a festival for everyone. Ramleela emphasis the win of good over evil, it shows the goodness of Lord Rama who is named as “Maryada Pursottam,” which means “the best among the dignified.” And though over the years the face of Ramleela has changed dramatically and sadly it sees less attendance, despite the use of technology and professional actors being used to enhance its appeal, two things have remained the same. One, the old flavour and joy is still not lost in this age of modernism. Two, the teachings and essence behind the act is still as pure. Interestingly, the Ramleela is the best street play ever produced by India and over the years, it has even travelled overseas! And that explains why people across ages still come to see Lord Rama defeat Ravana, who was supposed to have ten heads. In mythology, the heads represented lust, anger, delusion, greed, pride, jealousy, mind, intellect, will and ego. The lesson behind the whole act is to defeat these qualities in our own self, which is represented by Ravana by our virtues represented by Rama. After effigies and Ramleela, the next thing that comes to my mind about Dusshera is of course the sweets. Dusshera is celebrated with large offerings and servings of jalebis.

The Ramleela, effigies and jalebis makes up for the celebrations in northern India and some parts of Maharashtra. In the eastern part of our country Dusshera is celebrated as Vijayadashami. It is celebrated as Goddess Durga defeats Mahisura, the demon. Vijaya Dashami or Durga Puja coincides with the harvesting season. So the Goddess is prayed to and evoked to bless the farmers with fertility of the soil and rains, to bring in fine harvest. The Goddess is worshipped across pandals, homes and temples with absolutely amazing craftsmanship and devotion.

Indeed, the drama, fireworks and sweets make the festival but what truly defines it is the simple lesson, victory of good. And again as this year I wait for the festival I hope and pray that the country too overcomes all its problems and as Rama returns to Ayodhya amidst the lights and celebrations, so should goodness and fortune return and reign the country forever. The image above shows some such evils from road rage to child abuse and corruption to dowry. Yes, times have changed but the essence is still the same and as pure.