On a recent trip back home to Kolkata, I was scheduled to meet my fave gal pals, who were incidentally in town too, after some ten long years. We were to catch up at my tiny pad, which had for years, shared the privilege of being the crash out zone, to our growing up years, before we succumbed to bigger and better jobs, in far flung cities.

For Bengalis good food is synonymous with greasy, oily ‘deliciousness’ Here’s an oil-drenched food tale of bhaja, luchi and khichdi
(and while you are at it, add more bhaja!) for you. P.S: Can someone hand us a Gelusil please?

Needless to say, we were an excited lot, and after the initial giggles had subsided, we came to the big question of what we should be munching on, to keep the momentum going… While adda is known to have satiated many a Bongs’ appetite, we need to mention here, that a good adda is almost always also never bereft of one good food or the other. Simply put: Just like there is no separating the Bong from the adda, there is also no separating the food from the adda.

And at that time when we were beginning to debate the much popular Kolkata street hits such as the egg rolls and the fish fries, one gal pal declared her undying love for the humble Tel Bhaja, and how much she missed her favourite evening snack in San Diego, her current place of residence. Just enough to get us salivating, and making a beeline for a handful of the fried delicacies at the neighbourhood shop, in the deliciously fading winter evening of Kolkata. 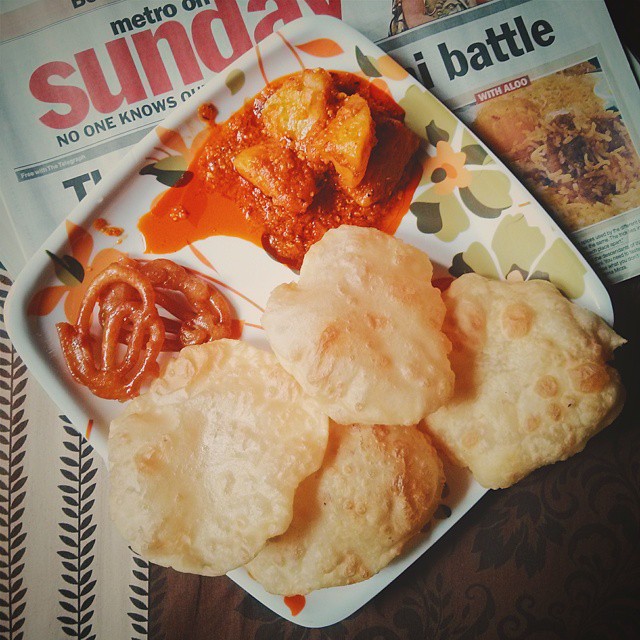 Tel Bhaja, which literally means ‘fried in oil’ is a Bengali staple, has been a loyal accompaniment to the Bengali platter, no matter what the time of the day, or the month. Made out of gram flour batter, Moori (puffed rice)-Tel Bhaja combination is still regarded as the most favourite of all Bengali snacks. And almost all localities in West Bengal will boast at least a couple of these small run-down shops that have been selling out these fried delicacies, for generations together.

While there are a wide variety of Tel Bhajas available, particularly in the line of tiny shops dotting the narrow by lanes of North Kolkata, four of the most popular Tel Bhajas that can get any Bong in any part of the world salivating are:

So, a typical Bengali Sunday breakfast will include Luchi (a Bengali style flat bread made of maida), and Ghugni (another Bengali delicacy made using small yellow peas), with the longish Begun Bhaja, which will have a part of its stem intact for greater impact, and not with the popular evening snack, that is, Beguni.

Peyaji: Where thinly sliced onions are mixed with gram flour and then deep fried in mustard oil.

Alur Chop: Boiled and smashed potatoes with a sprinkle of spices dipped in a batter of gram flour and then deep fried in mustard oil.

Phuluri: Dollops of just the flour batter made into balls and deep fried in the hot oil. 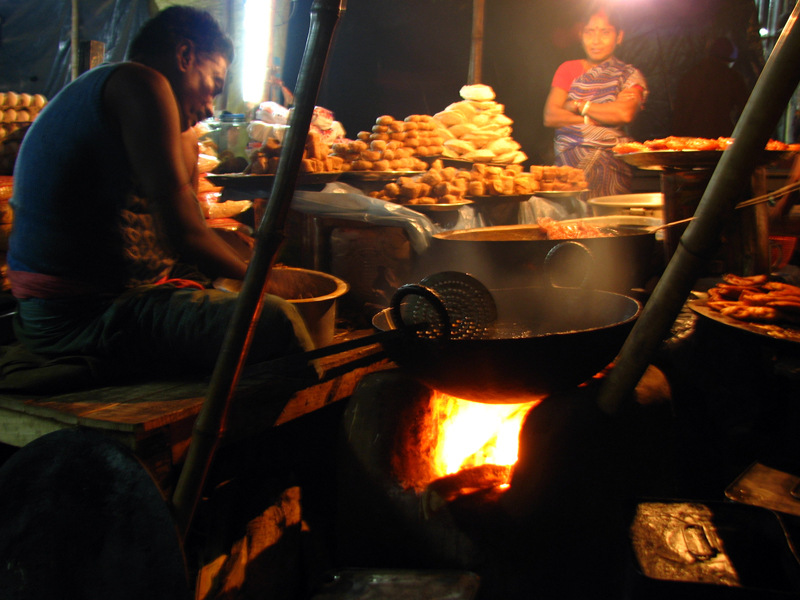 When not humble accompaniments to a heated debate over the country’s state of affairs, the Beguni and Peyaji are most likely to occupy the hot seat with a steaming plate of Khichdi, (Khichudi as the Bongs call it), most relished by the food loving Bong, either at a time when it is pouring outside, or at the peak of winters, when the Khichudi is given a dash with all the available seasonal vegetables with a dollop of ghee and some garam masala.

While the Tel Bhaja when paired with endless cups of tea, will continue to occupy its place of pride in an adda session for years to come, there is more to the Bongs’ endless love for Bhaja of any kind. It is commonplace to find a Bhaja element, as part of every meal served in a Bengali household, the only difference being in the technique: for the regular Bhaja, the vegetable is not dunked in the deep flour batter, as it is for the Tel Bhaja.

What is even more fascinating are the twists that the humble Bhaja is given, depending on the dish it is likely to be paired with. So, a typical Bengali Sunday breakfast will include Luchi (a Bengali style flat bread made of maida), and Ghugni (another Bengali delicacy made using small yellow peas), with the longish Begun Bhaja, which will have a part of its stem intact for greater impact, and not with the popular evening snack, that is, Beguni. On the other hand, it will be Lomba Aloo Bhaja, with masoor dal with a pinch of gondhoraj lebu for lunch, but for a day, when there are guests at home, it will be the more tricky-todo Jhiri Aloo Bhaja paired with Sona Moonger Dal to lend the platter a more ceremonious touch.

While the Aloo Bhaja and Begun Bhaja most often transcend seasons, and are enjoyed all year round, certain fried elements such as the Fulkopir Bora make an appearance only during the winter days, when the best variety of cauliflowers are on the market. Although dunked in a flour batter with a smattering of nigella seeds before being deep fried, the Fulkopir Bora is in most places a strictly household offering, and is not likely to be found in the paarar (neighbourhood) Tel Bhaja shops. Despite all the health warnings floating around, the Bengalis’ love for deep fried oily snacks is not likely to go anywhere anytime soon. Simply bring the food loving Bong a plateful of Khichudi, coupled with a few Begunis and Fulkopir Boras, on a winter afternoon, and there is little that he/she will ask for. And for all the times, that there is a case of going OTT with the ‘Bhaja’ bit, the Bengali bhodrolok will swallow on an ever-reliable Gelusil without as much as batting an eyelid, to ensure all is well.