There are many cars across the globe, which have carved a special identity for themselves over the decades. The Ambassador is one of them but totally unique in the way that it’s still being produced. Yes, a 1958 model, which hasn’t been changed much and is still selling and also finding some growth!

Yes, this is the good ol’ Ambassador, a car oft referred to as the ‘batti wali gaadi’! The car, in which many of us were brought home after birth, took it to the college, took the girlfriend in it for a date, ferried kids to the school in it… Today, the Ambassador is on a life support system with even politicians opting for other machines. Funny enough, although, the car is based on a British model, there’s no other car in the country, which is considered as Indian as the Ambassador. Our tribute.

Ambassador’s journey started as a Morris Oxford III by Morris Motors, which made it from 1956 to 1959. Since 1957, the car is being manufactured at Hindustan Motors’ plant in Uttarpara, West Bengal, India. Although the car is based on a British model, there’s no other car in the country, which is considered as Indian as the Ambassador. Generations in the country grew up in the car only to buy another one in their lifetime. 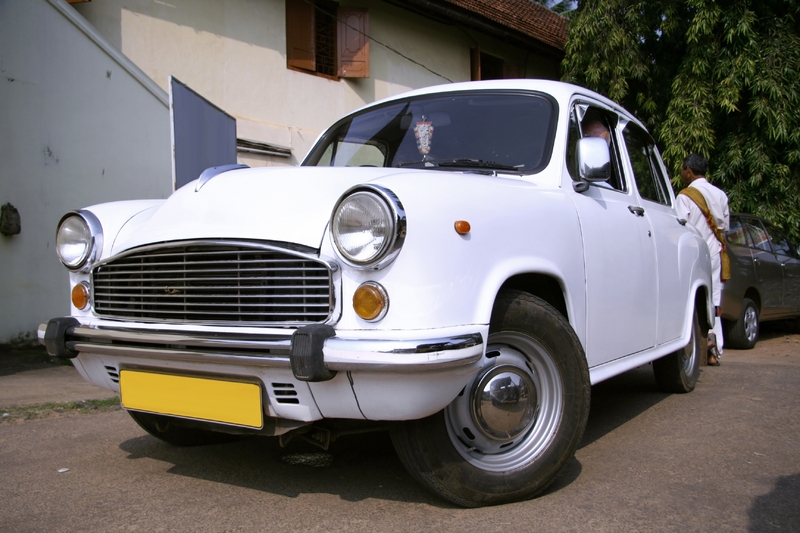 In its nicer days, the Ambassador was an arriving statement in life. Everything about it, right from the exteriors to the interiors was exactly the way we Indians like it, extra-large. Today, unfortunately, the car is no longer a part of the buying ideas of the public as better and modern cars offer more VFM (Value for Money). However, the car continues to play a diverse role in the country’s transportation paradigm. On one end it continues to be used as a black and yellow cab in many parts of the countries, especially the East. On the other end, it’s still the preferred vehicle of politicians and bureaucrats, even if its popularity is now fading. The car had bench seats in the front and rear and a steering column-mounted transmission lever. This meant even four adults could be accommodated in the front seat along with five more in the rear. The rear seat of the car is something that the modern cars to find it hard to match. Ambassador’s seat was more like sitting on a couch and the acceptable ride quality made it a good place to be in for hours if one had to.  A rigid leaf spring suspension meant it could easily handle the roads or the lack of it at a time when India was still in a building stage after Independence. Looking back in time the Ambassador actually seems to be the right car for the country in the old days. India was a huge country, which was moving slowly at that time and its people needed a vehicle, which could handle abuse, carry at least twice the number of people the car was meant to carry and be easy to repair. The Ambassador did all of that and that too prêt well by the standards back then. It did lack refinement and power but Indians were in no hurry at that time and buying a car, be it any, was a lifetime event.

Ambassador’s decline started right after India’s economy got liberalised, before which the company had almost no competition. Indians would happily pick the Ambassador despite its lack of technology as they didn’t have many options. Things changed a lot when Maruti came into India and provided a car which was better suited to the needs of the growing middle-class of the country. The 800’s compactness was appreciated by people and made the Ambassador too large for convenience.

As more companies from the globe started entering India, Indians started getting spoilt for choices when it came to cars. Unheard technologies such as power windows, AC and power steering were the new social status symbols and the Ambassador was slow to catch up. New designs and better performance meant the young Indians were no longer interested in the car and were looking at sleeker cars. Over the years, people also realised that Japanese cars were extremely reliable and that too played against the Ambassador. Suddenly, in a span of about a decade, India’s most beloved car became irrelevant on the sales charts. The company experimented a lot with new features and engines but the new India had made its decision and it no longer wanted dated technology.

Today, the Ambassador sells in some small numbers and has surprisingly witnessed some growth as well, although that is mainly due to some political reasons. There have been stories and sightings of a new compact Ambassador, which could be slotted in the popular sub-four meter segment. It’s hard to comment on the future of the new car as its technical details and design are yet to emerge. However, the future of the present Ambassador is certainly on a life support system and the road ahead doesn’t seem to be long enough. The only hope for the company is its upcoming car and if the company gets it right there’s an ocean of emotion that it could cash on.

The burgeoning middle-class and rising incomes have been tapped well by most automakers around the globe. Hindustan Motors though failed to move at the required pace and is presently going through a challenging phase. Even the government, which ensured decent sales regularly, is now moving to newer cars. One of the most recent examples is Delhi Police, which has moved to the SX4 from the Ambassador for its top officials. This only signals an inevitable fate for the car if not the company. However, there would be many people reading this story, who were brought home after birth in an Ambassador, grew up in it, took it to the college, took the girlfriend in it for a date, ferried kids to the school in it and lots more. That’s the kind of part the car played in many Indians’ life and that’s the only reason why millions would be sad to see it go away. I’m still hopeful that the upcoming car does well for the company so that the Ambassador brand and its iconic presence stays with the country in some way or the other.