Why didn’t we have sales while growing up?

Last week at the mall, submerged under a pile of children’s clothes at a kid’s store, I saw a pink skirt which would perfectly fit my 2-year-old princess. I had the exact same one (well, almost) that my uncle had got for me from a trip abroad. The only difference – I was six then and the dress wouldn’t fit me till I was at least eight that was if I ate for three. The one in my hand had an adjusting elastic on the waist (an awesome innovation) – the one in my memory, my granny had to alter so that it stayed on my body. The poor piece of cloth underwent a major surgery but then it also meant, I could stretch wearing it till I outgrew it two years later. What a thoughtful gift!

The ROI (return on investment) had to be viable – how long can the kids wear it? can the clothes be passed onto the other sibling? Aah, the days of great Indian fashion jugaad!

First question: Why didn’t we have sales while growing up? At least parents wouldn’t have tortured their pretty little ones with ‘mindful’ shopping sprees where spending on clothes was strictly looked on as an investment. The ROI (return on investment) had to be viable – how long can the kids wear it? Can the clothes be passed onto the other sibling (if not) then a younger cousin? If it’s a two piece, could we mix and match it with many different outfits. Yes? Deal. Only then a purchase was made. I still cringe at the thought of the salesman saying, “So what if it’s big, it will be good for at least a year, aaram se.”  But then that wasn’t the time of seasonal fashion anyway. A year was good – aaram se! And now we live in an era where kids have fashion weeks too. Sigh! 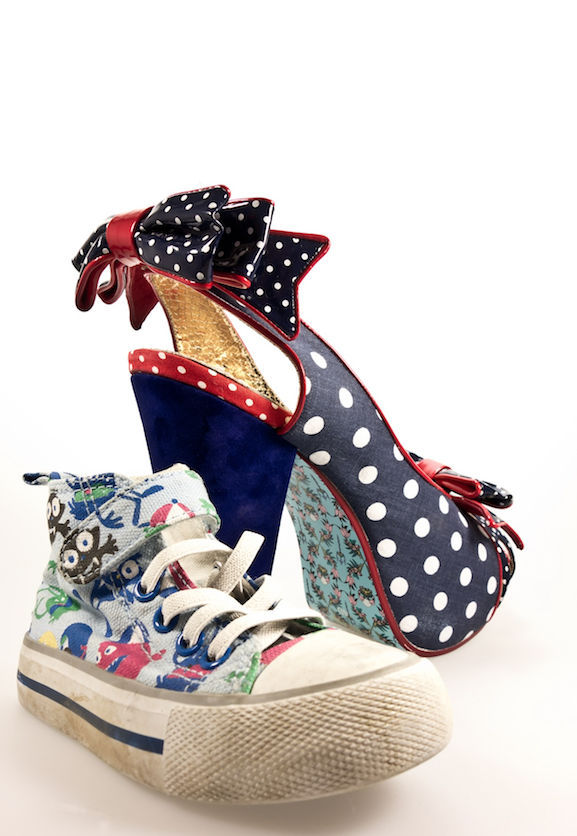 Fashion fry
Last I checked, my two kids have a total of 20 pair of socks, each to go with a specific set of outfit. While growing up, my brother and I had six, which we sometimes shared and most of my individual stock was passed down stuff. Except, maybe my red socks, which I think I earned by the virtue of going to a separate girls school. And by the time it was my chance to wear the hand-me-downs, the elastic usually went bad. “So what? Chalta hai. At least there are no holes in it. Besides, who looks at socks anyway,” said the voice of some elder in the family. In hindsight, elastic gone bad wasn’t such a terrible thing anyway. Most socks hanging to dry in the neighbourhood were like that. “Who sees what’s inside anyway. True that”

Sole story
Remember how the shoe company Bata made ugly but sturdy shoes which went with anything you wore – of course, the options you had were just black and white; so it was a no brainer. And accessories? What’s that? The only kids watch available then was a calculator one with a plastic strap – which was gifted to you only if you passed with flying colours and had reached your teens. Even then, you were allowed to wear it strictly on rare occasions (make that twice or thrice in a lifetime).

There were no such thing as eyewear, and caps were never about fashion; they were worn in the summers to protect you from the tropical sun. It didn’t make you look cool. In fact, for adult men, wearing one meant you have a receding hairline. Speaking of hair, I remember how the more well-oiled your hair was (read champu), the geeker you looked and being a geek was an ‘in’ thing for a really long time in every parent’s fashion book. Sadly, it’s still the case for some. Reminds me of the word ‘sober’ dressing. Shorts weren’t short, minis strictly had to end at the knee, midis fell at the ankle, spaghetti tops were for family trips abroad (the pics of which remained hidden in family albums anyway) and salwar kameez made you look so so ‘sundar’ that immediate ‘nazar lag jayegi’. While low-waist jeans had infiltrated the fashion scene in the west, it never ever got a thumbs up from any desi mom, or dad. The left eyebrow immediately went up and that meant an impending disaster.

Festive shopping
The only respite from this severe torture was shopping during the festivals. It was an annual ritual we looked forward to. Seems like the only time parents were really, really happy but then, coming from a middle class family, it also meant, they had saved up every penny they could for it. True splurge time. Le lo jo khareedna hai types! And that then was all about lots of bling and traditional attires that could light up the scene without any bulbs. That and Shaadi-in-the-family shopping. Same feeling. Matching choodis and bindis, jhumkas and jootis. Ah the joys of the frenzy. Everything else seemed mediocre against this madness. And once this shopping was done and the festival over, it was like going back to a dry spell. A long, long one.

And now…
In the world of online fashion where everything from a bob pin to a traditional sari is available at the click of a button and the sale banner refusing to go down in stores, I wonder if we now truly appreciate those little joys of shopping. What do we save up for now? What does bags and bags of clothes, accessories, shoes and bags without a shaadi or festival in sight mean now. Well, it means you have exercised your spending power, fed your ego and won’t be using half the stuff you’ve brought anyway. But then, every era has its charm – I just wonder what we will remember this one for!