by Team Trumpet Blowers -
Our Shabdkosh 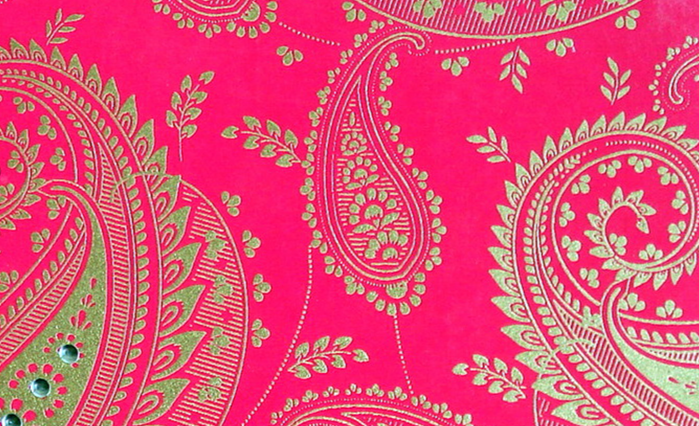 There are many theories on its origin. One of them being that it is a fertility symbol, the fresh shoot of a date palm. The date palm represented the tree of life for primeval Babylonians, being a source of their food, wood and wine. And from there it travelled all the way to Kashmir, India. But how did it get the very Anglo Saxon name paisley?

Also known as ambi in Punjabi, carrey in Urdu, kalga in Kashmiri, kolke in Bengali, koyari in Marathi and mankolam in Tamil…

It’s believed that in Kashmir the motif was incorporated in the popular Kashmiri Pashmina shawls and was soon enough declared as a must-have in the wardrobe of the royalty. India at that time was ruled by the East India Company and so taken in were they with the designs and quality of these shawls that many British of cers began to carry them back as gifts.

But these of course came at a price. The reason being that the fabric used to make these shawls came from the Himalayan goats. Each winter the goats would produce an under eece (Pashmina) to protect themselves from the harsh cold and this was shed each summer. This was then collected and used to make shawls. This entire process took about 18 months. The amount of time and effort it took to produce each shawl obviously made it very steep, and not everyone could afford it. This is when they decided to produce it in their very country using regular wool and handloom. Each piece was now ready in just two weeks! This made the shawls within the reach of a common man. And although a lot of European towns started producing it, it was a town called Paisley at Scotland that produced it in the most nancially viable way and produced it for the longest time. So when customers shopped for it they would say we are buying “paisleys” both for the shawl and a reference to the place from it came from. And that’s how it came around to being known as a paisley.

Today, the motif is being used not only to adorn shawls but also for all kinds of garments, furnishings, furniture and even wall art.

Books to read: The Paisley Pattern: The Official Illustrated History. (Compiled by thepurplehomes.blogspot.com)